I wasn't sure how I would do in this race so soon after Boston but wanted to run it. Temp was 70F so a bit warm, but legs felt good. I planned to attempt a 6:10 pace, the same as I ran course last year when I set a PR. I didn't have any idea if I could do it so would just see how I felt which I guess is usually the case in any race. I started out on pace and kept behind Nancy. Once we turned onto Cedar Lake, passed her up the slight hill. Bill was way ahead of me and there were 3 guys ahead of him and the wheel chair racer in the lead. I eased up on the pace just a bit. This seemed like a fast course, but I just could not keep the pace at 6:10 today. Kept it pretty steady the last 3 miles and finished in 5th of 42 runners, first age group, but no actual awards for age group. Course came out to 4.96 on GPS and ran 31:11. Other Long Run Lunatics running were Hugh, Phil, and Brett. Brett finished closely behind Hugh. I had a yummy cinnamon roll and then hung around until the next race that was also started in Bethel Park.

We walked over to the other shelter to Amanda's 5K. Hugh decided not to run this one but was joined but Brett, Phil, and John P. They had a huge crowd and I heard there were around 300 entrants counting walkers. This was a race to raise money for Amanda for a prosthesis.

I decided I would try to start out with Phil and see if I could keep up. I was hoping for at least 22 minutes. The course started in parking lot, headed down Bethel, and then all the way to the end of Southampton and back. Start was kind of awkward in the parking lot with so many people. I started slow and then caught up to Phil. About 0.3 mi we turn onto Bethel. I decide I can pick up the pace and run ahead of Phil. I notice at this point there are only 2 guys ahead of me and they are running together. I am easily catching them and don't feel like I am running that hard. The wind is against us on the way out. I pass them and cannot believe I am in the lead with all these people. At the turn around is Tom and Robin. I see at this point I have a good lead. I keep the pace steady and now have the wind behind me but it is feeling warm. I was pretty confident at my pace no one was going to pass me. The runners coming at me on the other side were offering encouragement.

I make the turn onto Bethel near the end and Hugh runs a bit with me. Then I turn into the parking lot to finish. Course was only 3 miles, but I was ecstatic with my time of 18:23 for 3 miles. I think would have been under 19 min if had been a full 5K. I definitely think the 5K was my race today and not 5 mile. I guess I had enough time in between to recover enough as well. Phil placed 2nd and also got a nice basket of goodies. Definitely the race to win a prize here.

My award was a super-cool big basket of various Nestle Products. A very nice gift and loved it since a good portion of it was chocolate. I was glad they had a huge turnout and I think this fundraiser was a huge success for them. 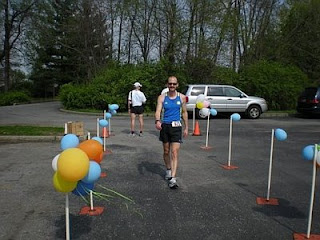 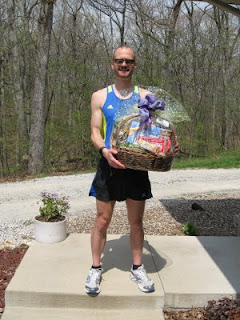 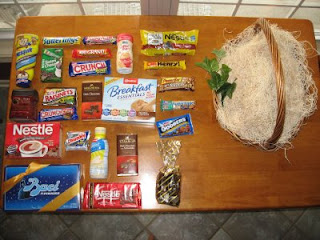 Hugh claimed the coffee, but Andy ate all the rest pretty much by himself. he earned it. :-)