After getting up at 4 am, Hugh and I left at 4:45 am to drive to Wyandotte County Park in Kansas City, KS for the race. He was kind enough to get up and go with me to fulfill my need to run a trail ultra. I didn’t have time to prepare anything to eat before we left so we went to the drive-thru at McDonalds for an Egg McMuffin on the way out of town. I sipped on some Accelerade as well on the way there.

After driving 2.5 hours we arrived at about 7:20 am. The temperature had dropped from 30 F to 23 F from when we left Columbia and there was a dusting of snow on the ground. First order of business was to use the bathroom and then picked up my race packet and number which contained the timing chip. The packet included a bright yellow-orange wicking shirt, Psycho Psoup mug, and some candy hearts. We headed back to the car and moved to a closer spot to the start line. Then I changed shoes, and figured out what clothes to keep and remove. I was trying to decide whether to wear the Mizuno running pants or not. A couple runners out of several hundred were wearing shorts so I opted for shorts although some girl commented that I was crazy when she saw me heading to the start line later. I decided to keep my running jacket which did come in handy for holding all the baggies of powdered Accelerade and Accelerade Gel. I mixed one in my water bottle since we were required to carry a bottle and refill at aid stations.

At 7:55 I get out of the car and we headed to the starting line. Hugh took a few pictures of me with his phone and I decided to head to near the front of the starting line. The race promptly started at 8 am and we were off across a field. We had about 1/3 of a mile to spread out before heading into the woods. The first couple miles of the trails were pretty torn up from horses. The ground was pretty frozen and this was really tough to start out running on this surface. My fingers were cold and numb for a couple miles, but then warmed up.

About mile 3 we entered the Psycho Triangle which is a confusing switchback section. There is an aid station at this section that we encounter on the way in and then again on the way out. This section had sharp turns with trails running near each other so I could hear other people close behind at times even though they were not. I was following close behind another runner through this section. He offered to let me pass and I told him I would let him know if I needed to do so. I ended up staying behind him and he ran ahead.

The course overall was very hilly and described as 20% flat, 40% up and 40% downhill. There were lots of rocks and roots to run over and steep hills and downgrades, and a few trees to climb over or duck under. A few times we got to run in grassland area which was a welcome break. Also there were a few short sections of pavement, one which came at about mile 5 and was 1/3 of mile up hill. This hill road section came after we had just climbed a hill up to the road. The trails along the course were very well marked with flags and signs and there was never a question of where to go. There were also amusing signs along the way and flowers sticking in the ground in along one the grassy areas in honor of Valentine’s Day.

I had told Hugh not to expect me before 1.5 hours on the first loop, but ended up completing in 1:29:00 so he just missed seeing me. He had gone out for a 5 mile run and then was going to run 5 more miles while I ran the second loop. He was back in the car when I came through after the first loop. There were 3 aid stations on the course, but I didn’t need to stop at any since I was carrying everything I needed. Before I had completed the first loop, I added another bag of my Accelerade powder to my bottle and had it ready to fill at the end of the first loop so stopped less than a minute and was off again.

At this point, no one was running near me. On the second loop I caught up to the guy that I was behind for awhile on the first loop. The race had included either 1, 2, or 3 loops and he was running 2 loops. I ran behind this guy for awhile. He was running his first trail race. Eventually, he had me go around him and wished me a good race. At the Psycho Triangle a guy I ran with a Syllamo and also have seen him at other races said hi to me. He actually got me through the 50 miler at Syllamo last year when he caught up to me with 5 miles to go and got me running again.

The second loop some of the snow was starting to melt and the some of the downhills were slippery. I skied a little ways down one hill but managed not to fall and then slipped down another shortly after that one. I was still feeling good and kept the pace steady but cautious to avoid falling on the treacherous parts of the course. By the end of the second loop it was starting to get a little muddy where the sun was hitting the trail.

I finished the second loop in 1:36:56 with an overall time of about 3:06. Filled my bottle again the same as before having already dumped in the Accelerade while I was running. I also had been taking a gel Accelerade gel about every 5 miles and did not consume any other food. Hugh got to see my take off for the 3rd loop, asked how I was feeling. I said good and I was off to finish the last loop.

I spent a lot of time on this loop passing slower runners that ran the 20 mile race. This was kind of nice to pass the time since otherwise I ran this loop alone. By now I knew the course and also was cautious where I could see people had slipped. The course was getting muddier and this third loop turned into a complete mess. There was no way I could keep the same pace due to the mud. I had to slow down for corners to not slide. I ran up hills when I could but sometimes still had to walk a few steps to keep my footing. My shoes had stayed fairly dry since there was only 1 creek we crossed and it wasn’t that deep. Even though my shoes became coated with mud, my feet felt dry. There was no longer slippery snow on downhills, but now I had slippery mud on some of the downhills.

Everyone I encountered as I passed was having the same difficulty getting through the mud. The worst part was a muddy ditch we were running and I nearly lost it there as I tried to stay up right stumbling around like a drunk. I did hit my hand on the side of the muddy ditch so got my water bottle and glove a little muddy. Shoes were a mess and had to carry the extra weight of mud on them until it came off. This third loop I really had to think about keeping myself moving, no matter how slow and try not to walk.

I had no idea of my overall time since I only had my Garmin to show splits which are never accurate on these kinds of trails. I wasn’t tracking overall time as I was going. I wasn’t worried about anyone catching me at this point since I was confident they were having the same kinds of problems as me with the mud. I figured as long as I kept trying to run, they couldn’t catch up to me. Where I could I tried to run faster.

Finally, I get to the point where I know the end is near. It didn’t seem like the third loop was taking that long, but it took me 1:54:57. I was so occupied with keeping my mind on getting though it, I guess that made the time fly. Looking at the results this was the norm for everyone that each loop took them longer.

For each loop in my age group they had our place which I found interesting and also made me feel better seeing these results. I placed 2nd in the first loop, and first in the 2nd and 3rd loop. That third loop time really bothered me but I was still first within my age group for that loop. Everyone ran each consecutive loop slower than the first so I guess that is just how it was supposed to happen for this race. It was just a matter of the course worsened on each loop which made this challenging course even more challenging than I could have imagined after running the first 2 loops which didn’t seem too bad. If I had ended it there, I would have felt like I didn’t work very hard, but the 3rd loop was a real test and I feel like mentally I handled it well and physically I just did the best I could. I think I learned from this race to always keep running no matter how slow do not stop and walk. That mindset really helped get me through that 3rd loop.

After I finished a guy working the finish recommended that I get something to eat since I looked pale. Actually I felt fine and wasn’t hungry but ate a small bowl of soup, a cookie, and some orange juice. At that point I was not hungry at all and the thought of anymore food did not sound good. We walked back to the car, and I got my clothes to change. I scraped the mud off my legs with an ice scraper and cleaned up the best I could. My appetite came back and we then drove to the Plaza and had Cheesecake Factory for a late lunch before heading home. 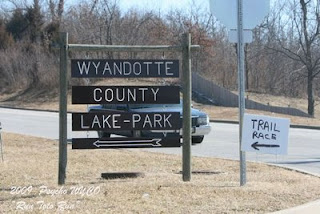 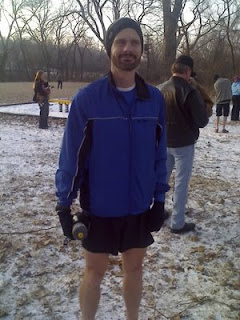 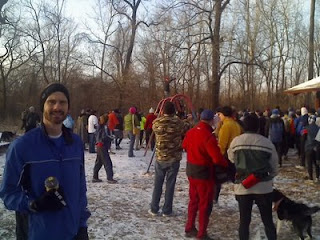 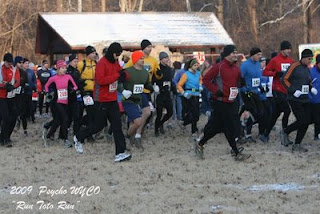 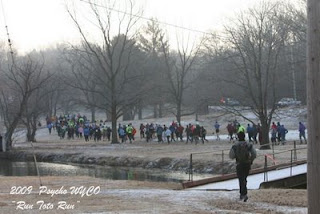 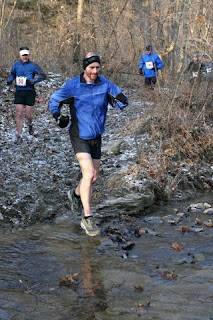 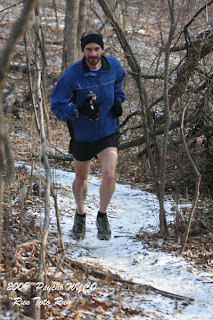 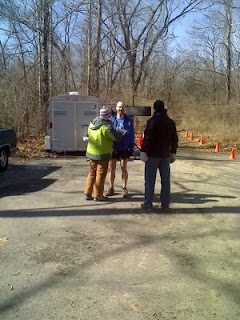 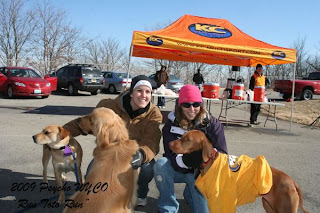 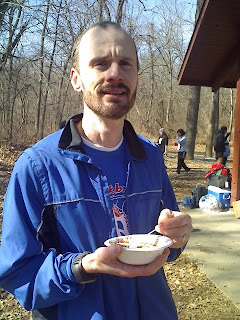 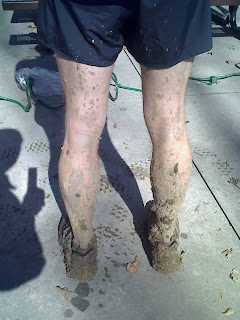 Nice run! Thanks for coming out and supporting our event.

Great report, yup that third loop was something special. Have you run the summer race version?