I have run this 50 miler 3 times and most recently last year.  It has always been a challenge either with mud, rain, heat or trees down.  This year the trail was pretty dry and the heat would likely be the biggest obstacle even though I tend to run pretty well in heat.

I drove down with Jeff and David on Friday and Shawn and Susan met us at the campsite. It poured rain a couple times in the afternoon so we went into the camper and did some napping. Karen and Steve also came by later and we all fixed our dinners.  I think we were in bed before 10 pm and set the alarm for 5 am.  Thankfully, I slept pretty well which I have not been doing at home most nights due to Rusty dog keeping me awake.

The 50 miler started at 6:30 am so had 1.5 hrs to get ready once I woke up.  I had a Lean Body shake, banana, and Hammer bar - about 600 calories total.  I also took a packet of Succeed Pre-Race Pack supplements which I tried for the first time ever.  There was no waiting the first 2 times to use the bathrooms.  The marathon starts at 8 am so that helps keep the lines shorter.  It was already in the 60s and felt very humid at 6:30 am and it was warm enough to run without a shirt. We were allowed a drop bag at the start and Brazil Creek at 16 miles.  I decided to put a bag at Brazil Creek this year so I wouldn't need to carry as much supplies.

I had a variety of gels, chews, and also used Plum Kids Organic Mashups smoothies.  The smoothies are in a packet like a gel but 3 oz and has a screw top cap.  They were apple based but flavored with other fruits and come in several flavors.  It was my first time using them and they were pretty tasty and caused no issues.  Also, I tried the Honey Stinger chews for the first time and they were good too.  I've found I like using a variety of things or I will tend to avoid eating.  I started out with Succeed Ultra in my bottle and switched to either the Clip2 or Amino, both of which have more protein than the Ultra later in the race.  In between I also used Hammer Fizz since I don't like too much plain water while/ running. Also, I left a bottle of PowerAde Zero at the start bag and Brazil Creek that I would drink to get extra hydration.  It goes down smoothly and helps me catch up when I am falling behind on hydration on a warm day. Two bottles would have been even better at Brazil Creek since I drank the entire bottle the first loop.  I carried a few of the Succeed caps and ended up taking only 3 or 4.  I was quite salty by the end of the day.

The course is two 25.7 mi loops. We started at 6:30 am and headed straight into the woods.  No one was eager to get into the front which is often the case at ultra events.  If you start too fast, you will blow up.  I wasn't sure where to position myself but started out at about the 10th position which turned out to be about right even though I was passed by 3 guys after a few miles.  Normally, I feel like it takes 8 miles or so to warm up but felt pretty decent early in the race.  My goal was to keep about a 10 - 10:30 min pace as long as possible.  Mostly I just ran by feel and kept it at an easy effort taking advantage of the down hills and keeping even effort on the up hills.

There were 6 aid stations plus the start/finish aid station.  Aid stations were 3.5 - 4 mi apart except the last one was 2.3 from the finish.  At the first station, I just topped off my Succeed bottle with water.  I had my first Honey Stinger Chews at about 1.5 hrs and only about half the packet.  Then had either a gel or chew or smoothie packet about every hr.  At aid stations I had a piece of banana and a few pretzels and sometimes nothing.  I had a few pieces of potatoes dipped in salt once.  Also, drank a cup of Coke a few times.

Eventually, I passed 3 runners in the first loop before 16 miles and the first 12 miles of the race felt really good.  After that still felt decent.  I had a guy running behind me for short awhile that I let pass before Brazil Creek but otherwise ran the entire race alone.  He had been chasing me down the hill and I didn't like the pressure so stopped on one of the switchbacks to pee and let him go by.  At Brazil Creek, I drank my PowerAde, ate some banana, and then took off.  When I left Brazil Creek, I almost forgot to get on the road and turned off on a trail but quickly realized my mistake so didn't waste too much time.  Ended up passing one guy on the road.  Also, realized I forgot to pick up more nutrition, but didn't worry about it. I had just had a gel so decided I would get what I needed at aid stations for the rest of the loop which ended up being Coke, bananas, and pretzels.  I was looking forward to getting the PowerAde and drinking the mini-smoothie back at the start.  It was humid and slowly warming up.  I was peeing fairly regularly so hydration was good and no nausea at all.  In most races 50K+, I feel some but not this time.  I was kind of feeling like I needed a bathroom and hoped I could make it the full loop.  I tripped on a few things but never fell.  I did drop my water bottle once when I tripped while trying to keep my balance.

I finished the first loop in 4:20:53 and headed to the bathroom.  Surprisingly, I finished the loop, 14 min faster than last year.  At this point, I was in 9th place.  They had told me 10th at the next to last aid station, but am guessing someone dropped after their first loop.  After using the bathroom, I picked up a full bottle of Succeed that I had already prepared, grabbed a few supplies and took off at about 4:25.  I wasn't thinking too clearly at this point since I nearly went back out down a different trail until someone yelled and I moved over to the correct trail.  About 9 mi into the second loop at 35 miles, I started to feel really good again.  I could run my easy pace, I was picking up my feet, nothing hurt and everything seemed to be going smoothly.

I started to come up behind runners that were moving more slowly.  I heard a couple guys talking and actually took me awhile before I caught up to them.  I stayed behind for a few moments and then decided to pass and their voices faded.  The only wildlife I saw all day were a couple turtles and had to jump over 1 snake.  The second time at Brazil Creek, I remembered to grab my nutrition.  I drank a couple extra cups of water in addition to filling my bottle.  I think the temp got up to around 81 but the sun stayed under most of the time. I had my second mini-smoothie on the way out and it went down very well.  I also remembered this time to take the road.  I think I was in 4th place at this point and didn't catch another runner until later.  I am really not remembering a lot of specifics which isn't unusual for me.

At the next to last aid station (45.7 miles), they told me I was in 3rd place and second place was about 10 min ahead and first an hour.  I am still feeling good but of course walking parts of any long hills.  I only had 1 mile over 13 min and that was at the Brazil Creek drop bag on the second loop.  Otherwise, mostly in the 10s - 11s with an occasional 12 min.  While I was running and especially during the second loop I was not paying much attention to my splits.  I kept pushing since I had made it this far and didn't want to slow down right before the end.  This was definitely going better than last year when Steve and I both felt pretty crappy the last 10 miles or so due to the heat and getting done didn't come too soon.

I crossed the finish in 9 hr, 1 min, 13 seconds (10:32 pace overall for 51.4 mi - GPS had slightly less), so 4 hr and 40 min for the second loop.  I was quite surprised I was that fast. It was only 20 min slower than the first loop and the closest loop splits of any other runner.  It is tough to run even splits on this course due to the fact it heats up the second loop which makes it harder.  The results have me in 9th place for my first loop, 2nd place for the 2nd loop, and placed 3rd overall. After I crossed the finish, Victoria (co-race director) walked over to me and handed me a plaque for the 1st place Masters which I also won last year for the first time.  Overall, this was my best overall placing in this race and I ended up only 2 min behind second place, and 55 min behind that fast Tommy.  This ended up being my second fastest Berryman 50 mile and feel like it is the best 50 I have run due to the splits and feeling good the entire time.  Also, felt like I had something left at the end.

After about 45 minutes, I felt like eating a bit and 45 min later I was really hungry and ate the left over food I had brought to the race. Even though I had drank what I felt like a lot during the race, I couldn't seem to drink enough after.  I estimate between the nutritional supplements and the aid stations, I consumed about 2000 calories during the race.  I waited with Karen (who finished the marathon earlier - 1st place Senior Masters) and Susan (who took good care of us) to see David, Steve, and Jeff finish.  Shawn was out pacing Laura for her second loop.

Last year my left ankle was sore after the race and this year it is the right ankle.  I did step on something a little funny in the last 5 or so miles so that may be the issue but it feels much better 2 days later.  Good to know that my left ankle isn't always necessarily the issue as it has been in the past.  Feeling very thankful this race went well and I feel good after.  I was a little worried about this race since my training wasn't all that had hoped and sleep was definitely lacking the past couple weeks. 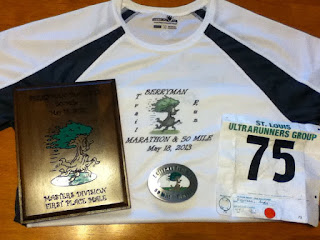