This year I decided to run the Roots n Blues half marathon since it was under new organization and also the price had decreased to more reasonable fee.  After the issues I had with it in 2009, I said I would never run it again.  The only challenge is this year it fell 5 days after Heart of America marathon on Monday.  There was also a 10K, but I really didn't think I would feel like trying to run a faster than a half pace.  The 10K did award prize money which attracts some really fast runners to the 10K.  My legs felt pretty good by Friday.  For some reason, I slept pretty poorly Friday night.  I wasn't nearly as nervous about the HOA marathon on Monday.  I felt kind of stressed wondering if I could keep a half pace.  I kept having dreams I woke up late and had only 10 minutes to get to the start line.  Instead, I actually work up a bit early.  Also, the right side of my neck and right shoulder had been stiff and sore on Friday.  I took a shower when I got up and helped to loosen up a bit.  Temperature was in the upper 60s, but humid and overcast.  I decided to wear a shirt since it felt a little chilly.

I didn't have time to warm up before but instead used the bathroom one last time and watched the 10K started at 7:30.  The starting corral was quite crowded, but race is chip-timed so not a problem.  There were 643 runners in the half and 618 in the 10K so the half was just as crowded.  It didn't seem like many people wanted to be in the front of the corral so wasn't crowded at all in that area.  I started next to Angie and Sam.  I doubted my sanity for being up in the front just a bit. Angie planned to run a 6:15 pace, but said she might start at a 6:30 which was my planned pace.  There was a course change at the beginning due to some stages being in the middle of the street the course was supposed to use.  We had a bike to lead the way so no problem figuring out where to go.

I was worried, I was starting a little fast, but hit first mile at 6:29 and could see Angie pulling away (no surprise there!).  There were 2 other runners that had pulled ahead trying to stay with her.  I took water at the first water stop close to mile 3 on the Grindstone Trail which is a nice flat section of the course.  Talked to the same guy I ran up the hill with at HOA for a few minutes until I went ahead.  I was starting to warm up so decided I would need to ditch the shirt somewhere and pick it up later.  I took a few seconds and left behind the soccer goalie near some soccer fields about mile 4.   I was maintaining my pace at 6:25 - 6:35 until mile 5 with the big hill up to the Stoney Creek Inn which slowed my pace.

I tried to keep an even effort up the hill and a couple guys passed me.  I had a 7:00 mile for that hill so thought that was reasonable since it is a tough hill.  I passed 1 of them back after I got to the top of the hill.  The course for the next 2.5 miles was either pretty flat or downhill.  There is a nice downhill on Forum which I did not fly down like I normally do at the end of training runs down to the trail.  I kept the pace under control to allow my heart to recover for the next uphill which would be coming soon.  Hugh was out running the course during the race and I caught up to him on Forum near the top of the hill.  He said I was in 4th place although shortly after a guy passed me.

Once we turned onto Stadium we had about a half mile to go downhill to the MKT trail.  There was a water stop here and a sharp turn before going into the tunnel.  This was the last of 3 water stops and I didn't get much in my cup, but since it was a half marathon and not extremely hot I was okay.  As soon as I came out from the tunnel, I was struggling a bit for mile 11 which was on the trail.  I was gaining on a guy ahead of me though that seemed to be slowing down more than I.

Tom M. gave me words of encouragement after I came off the trail with about 2 miles to go.  There was a bit of up hill but not bad.  For the last mile, I was feeling better and picked up the pace and easily passed the guy ahead of me.  Also, had some downhill in the last mile which helped the speed.  Running down the sidewalk on part of it was a challenge though since there was stuff in the way and people.  I finished mile 13 pretty strong at 6:40.  The course was just a bit short since several of us got only 13 miles.  I placed 4th overall of 643 and 1st of 48 in the 40 - 49 age group.  Felt lucky to place first in a 10 year age group, but placing 4th overall definitely helped.  The overall winner was Angie (same age as me, but female) and the 2 runners between us were 25 and 23.

We could have used a few more water stations which the race director said they will have next year.  I think the course could use tweaking as well so that it doesn't interfere with the setup of the festival and we could avoid last minute course changes that likely made the distance a bit short.  It did work well that the 10K runners started early since I passed very few of them walking on the trail.  I know there were some issues at the end of the 10K for the leaders, but that was not my race so I won't comment.  The race was definitely a huge improvement from when I ran it last in 2009.  It was the first year for this race director so I am sure next year will be even better.

Overall a fun race, a few bands along the course, spectators, and an adequately marked course (although some accurate mile markers would have been good).  Due to the last minute change, the mile markers painted on the road were not accurate.

Video Clips from the Roots & Blues Half Marathon 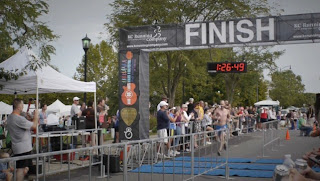 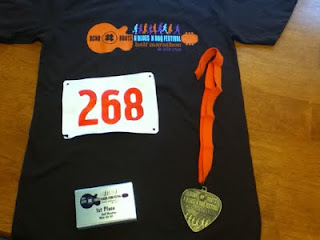 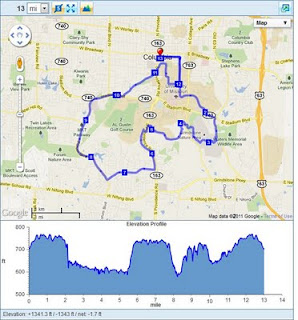