If you are looking for results and pictures see: Rock Bridge Revenge Results

On Saturday, I ran a 5K in Kirksville and even though I raced pretty hard, I was not concerned about running the 25K the next day since I have done a few multi-day races that were much longer. We had a late dinner at Fazoli's and then went home and got some much needed sleep since it had been a long day. The race started at 8 am. We left at 7 am and Hugh went with me. I had to pick up my packet since I had not done so the day before. Everyone received a Nathan Quickdraw Plus water bottle, a very nice premium for a race.

My sciatic nerve was letting me know its presence and I was limping a bit when walking due to the pain. I ran just a little before the race and could feel it, but not a big deal and no limping when running. The temp was in the upper 30s so I just wore 2 wicking shirts and shorts which felt about right. I carried one Nathan water bottle with Accelerade and 2 gels. Due to the temp and already being well-hydrated I hoped that would be enough although there were aid stations if I needed to refill. At 8 am after receiving pre-race instructions, we all lined up in the parking lot. We had a few yards to spread out before heading into the woods.

I passed a few people at the beginning before settling into a pace. I am never quite sure of my pace since my GPS seems to be a little slower on the trails than I think I am actually running. My first mile was 8:54 and I was hoping to be around 9 min average on this course. Most 50Ks on similar trails have been about 9:40/mi. This was my first 25K so 9 min miles was my best guess. Also, wasn't looking at pushing a super hard effort since I am running a 50K next Sunday.

I passed Kevin T. early in the race in the first half mile. After a about 2 miles, I hear him catching me and then let him go ahead. I figure he is running about the pace I need to be running so I planned to stay behind him. He was running the 7 mile so I would stay behind him until the courses separated at about 5 miles. We had to cross the usual cold creek and get our shoes wet. My shoes did dry out some and had no problems since I had applied Sports Stick to my feet. I was surprised that the trails were in such good shape since we had 6 inches of rain last week. As we were coming out of the woods, Dan H. was taking pictures by the Devil's Ice Box parking lot.

At this point, I crossed the road and run a small 2 mile loop that includes some grassland as well as trail. As I was coming out of this loop, I seen another runner just starting the loop. Kathy and Mary Ellen were directing and cheering for runners in this area. After that loop, I then ran a loop in the Gans Creek Nature area for 6 miles. The trails were very well marked with pink flags and signs in a few places. It was very obvious where to go so I had no problems staying on course. Around mile 8, I stop to get rid of some water since didn't think I could make it 7 more miles. I wasn't drinking much and didn't feel that warm either.

At mile 9, I got to see Hugh and Jeff at the campground which also had an aid station. I still had plenty of Accelerade so did not stop. There was an area shortly after that the trail was flooded with water. A path had been flagged to go around, but I decided to just run through it. It actually felt good and washed the mud off my shoes and legs. I took my final gel before mile 11 (had taken one earlier about mile 6). At mile 11 as I am climbing the steep hill, I see Jeff again. I opted to walk up the hill since it doesn't do much good to run this one. It is only about 0.1 mi long but it is quite a climb in a short distance. This course had plenty of other hills and I did run every one of those.

As I was coming out of the hill, I turned right and was back on the same trail I took going into this loop. I met a couple runners walking on this portion. I was still feeling pretty good and going fast as the last part of this loop went downhill where I had gone uphill in the beginning of the loop. I was back to where Kathy was directing people and Hugh and Dan were there (he took yet another picture). I ran back across the road and I knew I didn't have much more than 2 miles to go. Mile 14 felt pretty good and James was at an aid station somewhere on this mile. Then about mile 15 which had a couple hills, I was really ready to be done. Although I felt strong, I was glad I was only running 1 loop.

The final stretch was up the hill that we had come down into the park at the very beginning. Ended up finishing in 2:22:23, a 9:10 pace. GPS was very close to a 25K and my GPS is usually a little short on the trails. At the end we got a very nice finisher's glass. There was also chili, hot dogs, brownies, and drinks. The food was excellent!

Overall, I thought it went pretty well. I did feel my sciatic nerve for most of this run. The times I sped up to about 7:30 or faster, I did not feel it so I guess I just need to run fast. Also, I think the unevenness of the trail might have been an issue. Just like after Sat. run, it was very painful to sit in the car and then get up, but a hard bench was fine. We stayed around until the first couple 50Kers crossed the finish. The first 50K runner was Andy P. at 4:48 and the first 25K was 1:50. I would really like to run the 50K for this race next time since I enjoy this course so much. The course is so awesome, if you are in shape to run that far, 2 times is a must! If not, the one loop which is just a little over 3 miles longer than a half marathon is well worth the scenery.

Here are my splits: 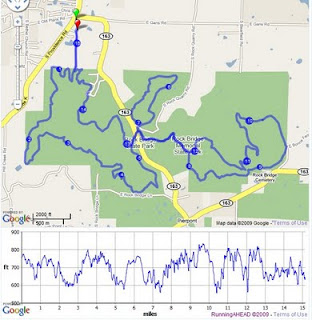 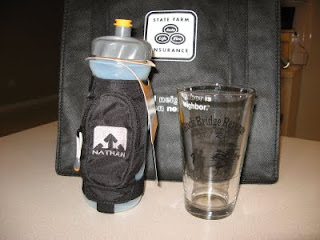 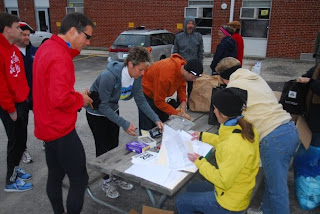 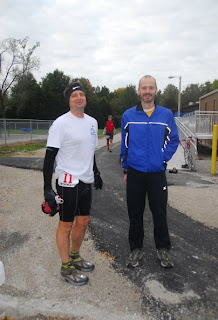 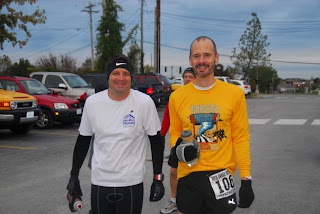 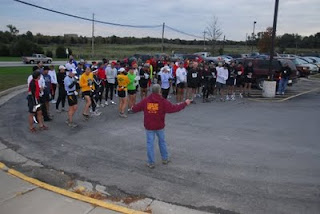 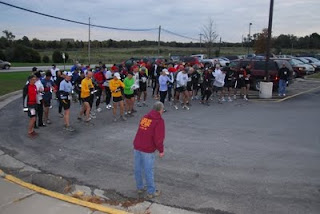 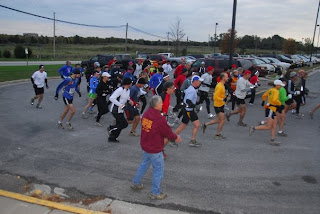 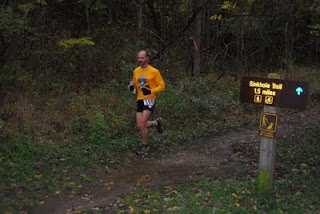 Andy at about 5 miles 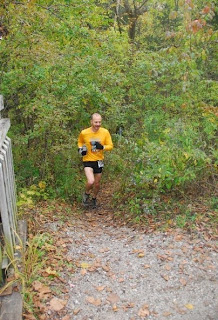 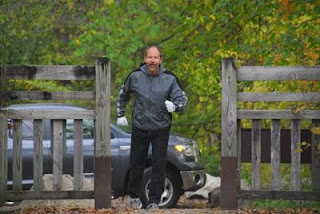 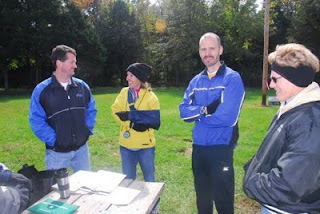 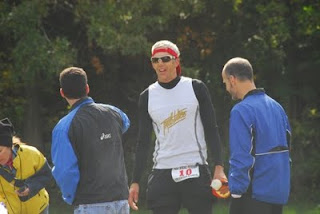 Andy P. after winning the 50K 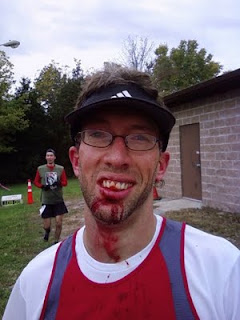 Rock Bridge Revenge had its revenge on Tony with 10 stitches!
Posted by Andy Emerson at 2:50 PM