Saturday, I ran the Rock Bridge Revenge 50K. I have run some form of this race back to 2003 when it was a 10K/20K for several years and more recently a 7mi/25K.  In 2010 and 2011 there was also a 50K which was discontinued in 2012 due to low participation.  This year there seemed to be interest in bringing back the 50K so it was added after registration had already opened and quickly received participants.  The race filled to its limit of 150 with each race pretty evenly split.

I only ran once the week of the race with my last run on Tuesday.  I was out of town early in the week and Thursday there was rain and thunderstorms the entire day.  It rained a lot in the days before the race with around 6 inches of rain in the park so there was more water than usual in the creeks this year.  Temperatures cooled down the night before the race and starting temperature at 7 am was 38F with a high of 53F and 17 mph wind predicted.  The wind doesn't have much effect in the woods but it did keep it feeling cooler than normal.  The other races started at 8 am and we went out and back on the road to spread out at the beginning so the race was not congested at all once we hit the trail.

As often seems to be the case, I really had no idea how fast pace to run but was thinking no faster than 9:30 to start.  My first mile which included the road was 9:09 so not too bad and I think I started on the trail in around 3rd place running behind the eventual winner with the eventual 2nd place guy up ahead.  After a few miles, the guy in front of me pulled ahead.  Then another guy came up behind me and I let him pass.  We ran together for a few miles until I stopped to use the bathroom at the aid station.  I was in and out pretty quick, probably less than 90 seconds but 3 people had passed me.  I passed 2 of them within the next few miles and caught the third near the Boy Scout camping site where he was confused which way to go.  In several places someone had pulled down some flagging and signs.  The flagging was stuffed under logs. I don't really understand why anyone would sabotage a course and would enjoy catching someone in the act some day to ask them.  We ran the rest of the loop together until we got back to the finish.  It was nice to have company for 8 miles.  He was running his first 50K.  At the creek crossing about a mile from the end of the first loop, we had to cross in waist deep water.  As I was sliding down the bank I nearly went in all the way but pulled myself up just in time.  We had 4 major crossing each loop and also a section of trail that was flooded up to my knees.  For nutrition, I was drinking Carbo Pro and had 1 gel and small cup of Coke at the 2nd aid station.

The first loop is slightly longer since we include the out and back on the road.  The course is actually a loop on each side of the road but I am just calling it one loop.  My time was about 2:36 by the time I started the second loop after I ate another gel, piece of banana, and refilled with Carbo Pro.  I was definitely starting to feel tired by this loop so had to start pushing myself.  I was hoping I could finish in less than 5:30 even if I slowed down.  I ran the next 7 miles at about 10-something pace.  I saw a lot of the 25K runners in the second part of this loop and some of the 50K runners on a section that we run both directions.  I managed to fall a few times but it was mostly when I was barely moving and got off balance due to some of the mud or just stumbling a bit.  Once I cut my hand slightly and my left hip that I fell on over a month ago was a little sore again but fine today (Monday).  The aid station in the second loop was wonderful.  About a quarter mile or so from the aid station, Zach (one of the volunteers) was ringing a cowbell and carrying gels down the trail so I had another one.  When I got to the aid station, I had a cup of Coke and Ginger Ale.  I ran the last 9 miles at mostly an 11-something pace.  I wanted to run faster, but it was not to be.  This time, I was extra careful sliding down the creek about a mile from the end.

The last part of the course goes up a hill and into the finish.  I guess this is part of the "Revenge". The total elevation loss from my GPS was 5800 ft so not nearly as bad as the Barkley Classic 2 weeks ago which made this race feel quite a bit easier.  The hard part was trying to keep up the pace since I finished 4:15 faster than Barkley in 5:22 which was good enough for 3rd place (33 total finishers). I had a 10 minute positive split so not too bad. The winner ran 4:38 (and a negative split) and 2nd place 5:17.  I ran 11 minutes slower on the same course in 2011 but don't think we had as much mud and water to deal with.  I'm happy with my race and recovering immensely faster than the torture I put myself through at Barkley.

I was ready to eat a few minutes after finishing.  Earlier in day pancakes were served but for those of us finishing later we had pulled pork, chips, cookies, and chocolate milk.  Hugh ran the 7 miler and then went home, ran again with the dogs, and came back about when I finished.

Race nutrition consisted of 2 servings of Carbo Pro, half banana, 2 cups Coke, 1 cup Ginger Ale, and 3 salted watermelon gels they were serving at the aid stations. I don't normally use many gels, but those weren't too bad.  I'm guessing around 1,000 calories. 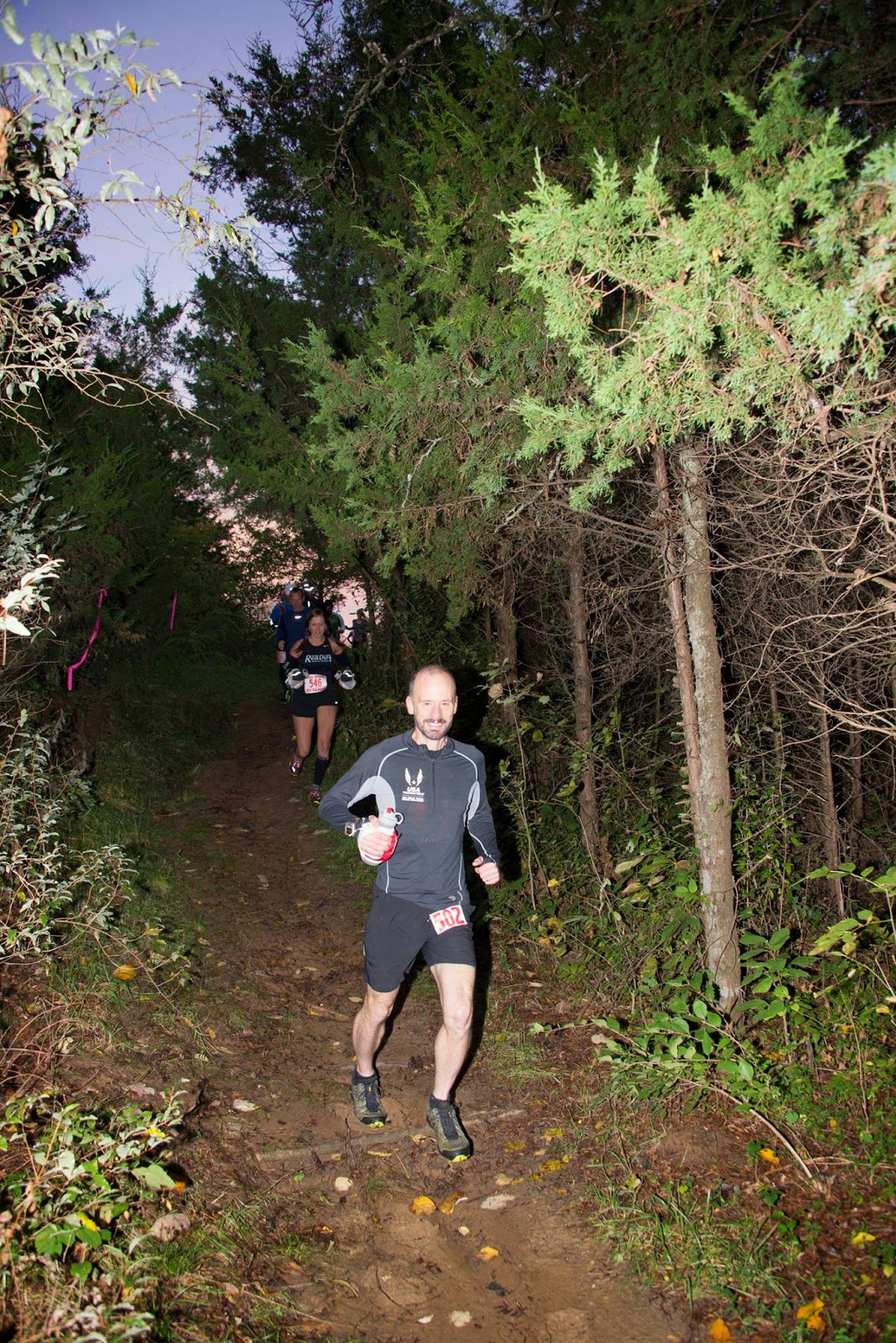 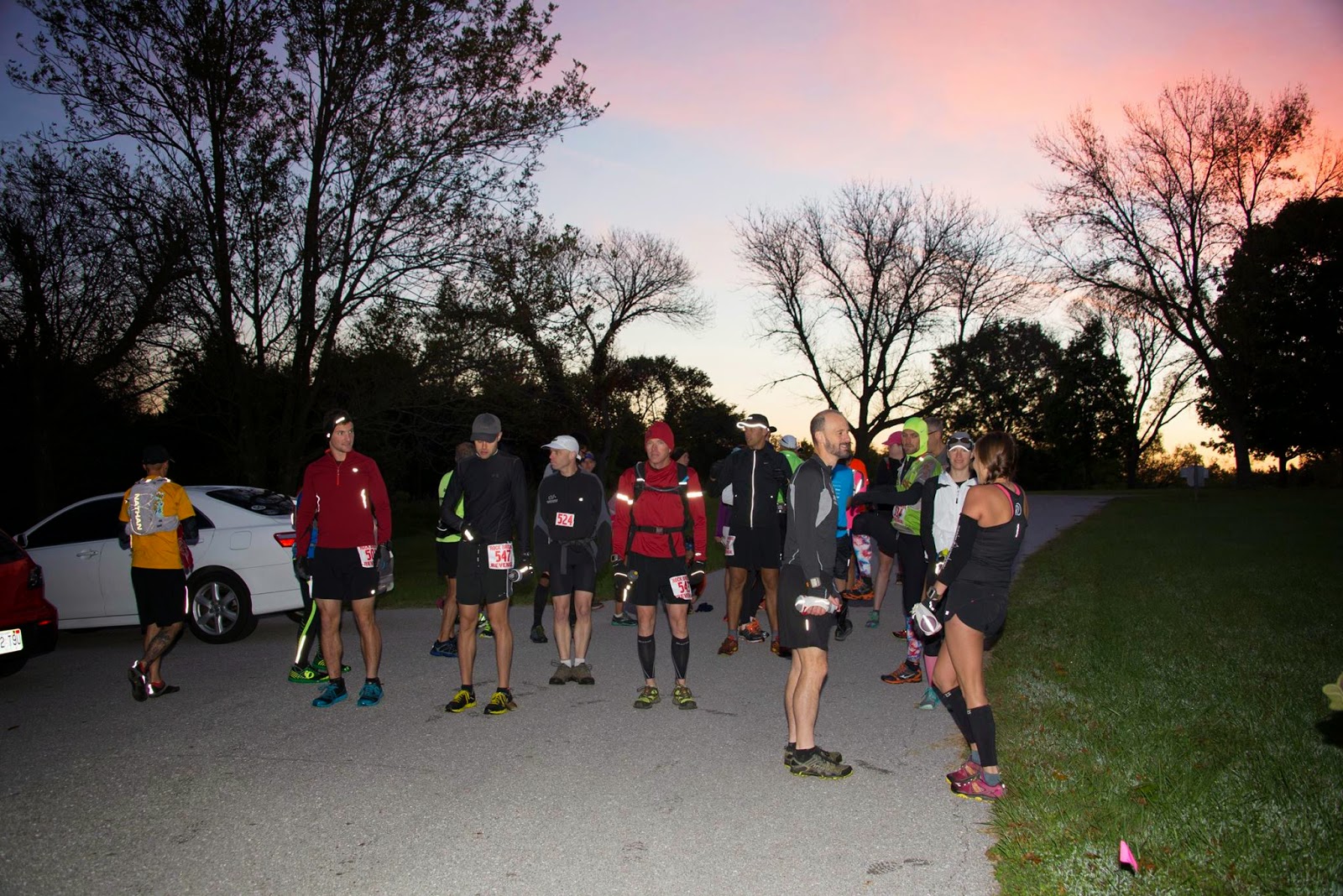